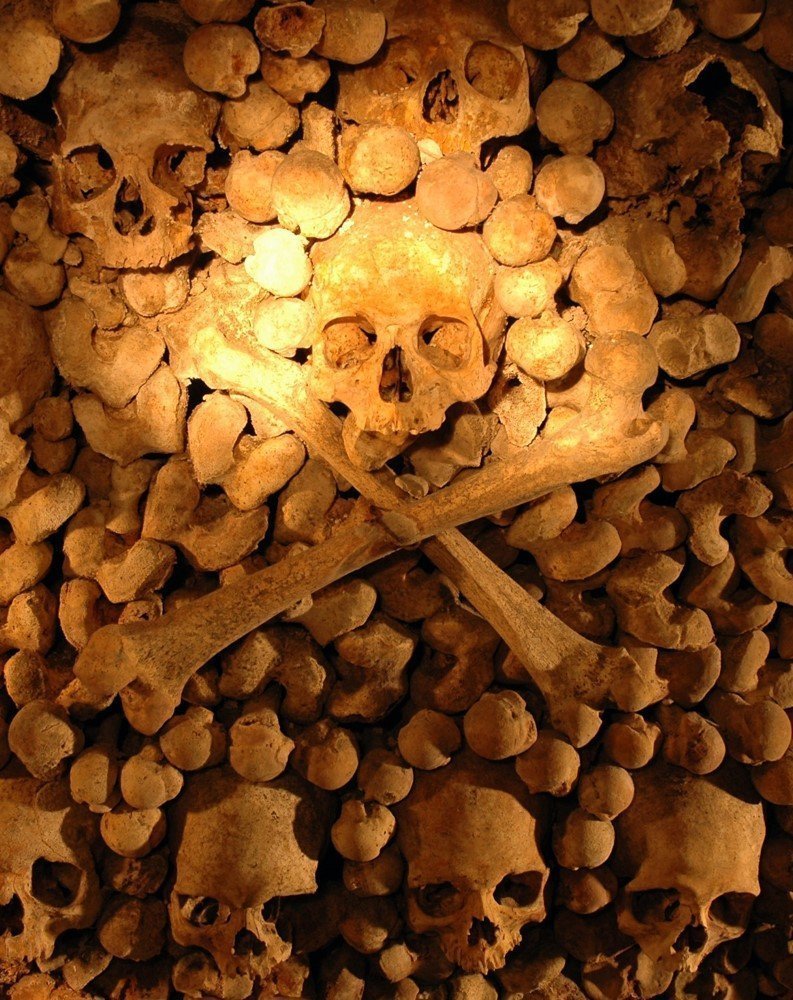 Tickets available at the CIDJ, 10 days after booking.

The origin of the Paris Catacombs, which it would be better to call “Municipal Ossuary”, goes back to the end of the 18thcentury.

The name of ‘Catacombs’ was given to this ossuary in reference to the Catacombs of Rome, a name originally given to an ancient cemetery situated not far from the Appian Way. The Cemetery of the Innocents (near Saint-Eustache, in the area of Les Halles) had been in use for nearly ten centuries and had become a source of infection for the inhabitants of the locality. After numerous complaints, the Council of State decided, on November 9th 1785, to prohibit further use of the Cemetery of the Innocents and to remove its contents.

Disused quarries were chosen to receive the remains; the City of Paris had in fact just completed a general inspection of the quarries, in order to strengthen the public highways undermined by them. Building work was done on the “Tombe-Issoire” quarry, using large quantities of stone, strengthening the galleries and completed by digging out a staircase, flanked by a well into which the bones could be thrown.

The transfer of the remains could begin after the blessing and consecration of the site on April 7th 1786, and it continued until 1788, always at nightfall and following a ceremony whereby a procession of priests in surplices sang the service for the dead along the route taken by the carts loaded with bones, which were covered by a black veil. Then, until 1814, the site received the remains from all the cemeteries of Paris.

Since their creation, the Catacombs have aroused curiosity. In 1787, the Count d’Artois, the future Charles X, made the descent, along with Ladies of the Court.  The following year a visit from Madame de Polignac and Madame de Guiche is mentioned. In 1814, Francis I, the Emperor of Austria living victoriously in Paris, visited them. In 1860, Napoleon III went down with his son.

The Paris Catacombs re-opened on June 14th 2005, after several months of closure for building work. The lighting has been adjusted, the vaults strengthened and the walls of bones put back.

Conditions and accessibility:
-Visitor numbers are restricted to 200 at any time. Admission may be delayed for a short time during busy periods.

Distance covered: 1.5 km. Duration of the tour: 45 minutes.
There is no cloakroom facilities available. Animals are forbidden.
130 steps to go down and 83 steps back up to street level.
Temperature: 14°C.
The tour is unsuitable for people with heart or respiratory problems, those of a nervous disposition and young children.
The Catacombs are not accessible for persons with reduced mobility.
Children under the age of 14 must be accompanied by an adult.

10% off on your nautical activities at the Basque country

Up to 25% off at the Grevin Museum